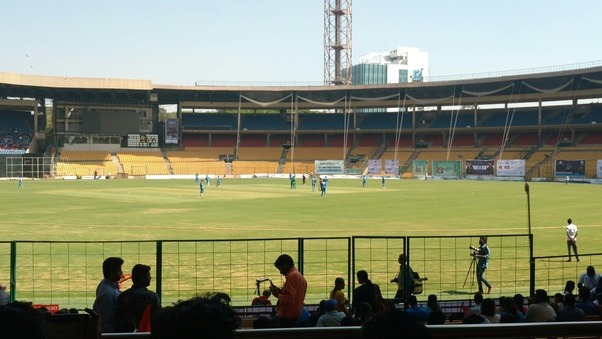 Last year in April, I was on Bangalore’s Metro train to MG Road, on my way to a meeting. As the train pulled out of Cubbon Park station, a visually impaired young lad got in. Someone scrambled to make way for him. He was on the phone. I glanced at my Kindle, waiting for the train to arrive at MG Road. Snatches of his conversation floated through, seated as he was in front of me.

“They are asking me to pay the fees today itself. I am trying my best to arrange it,” he said in Kannada. The MG Road station drew closer. I listened more closely. It was about Rs 1,500 – the fees he was talking about. I had that amount in my wallet. I didn’t give it to him. I thought of it. I did. Sometimes, our thoughts are not enough, though. As Jane Austen put it beautifully:

It isn’t what we say or think that defines us, but what we do.

I didn’t do enough then.

Outside, I could see the beautiful Freedom Park rush by as the train emerged from the underground. Light rushed in.

I wavered, my hands on the purse, as the train drew to a halt. Should I? But something still held me back. Years of well-honed cynicism. Years of wanting to hold on. Years of training ourselves to believe the worst of the world. I don’t know which of those years played on my mind as the train arrived at MG Road.

The lad was still on the phone. I didn’t give that money. Instead, as the doors open and impatient Bangaloreans entered, in one last moment of redemption, I gave my business card instead to the passenger seated next to him, asking him to give it to the lad.

I got off the train and cried. I sat on the steps at the gloriously painted Exit D of the station, watching people rush in and out, all in a hurry. I watched them and saw myself in all of them. We with our pettiness and our indescribable capacity to be truly great in our kindness. I cried because I am so far from that capacity.

End of story? No.

A few weeks later in May 2017, I get a call from an unknown number. It is him. The same lad. His name is Nandish. He had paid the fees by then, pulling through with some funds from here and there. I heaved a sigh of relief – somehow that associated guilt had been hard to bear. We chatted on the phone in Kannada and thus began one of the most unusual friendships I have in my life.

Over the last year or so, I have got to know Nandish, speaking to him on the phone. I haven’t met him since that time on the train. Funny, isn’t it? But that’s the way we play life these days. We are too ‘busy.’ But my apparent ‘busyness’ hasn’t put off Nandish.

Because he calls often. And the more I know him, the more I am awed at his courage and tenacity. 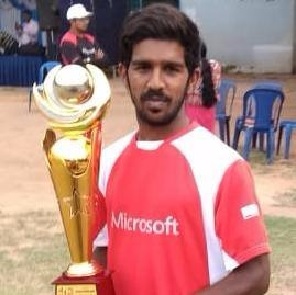 Nandish plays what they call as “blind cricket.” He is pretty good at it too. Team sponsorships are difficult to come by for cricketers such as him who listen to the sound of the ball and the rhythm of the ground. His dream is to play for the Indian cricket team for the visually impaired. “But I don’t know if I will get through, Ma’am,” he says. “So much politics.” I nod on the phone. Yes. We know that term all too well. But I didn’t know that influence and political pull extends even here to this.

Yet, sports is all he dreams of. I don’t remember any of our conversations revolving around education. We always talk about sport and how sport can transcend our physical limitations. Not just cricket, Nandish is also adept at rock climbing. I have never tried my hand at rock climbing, except for one tiny stretch in Shivagange, Bangalore. Rock climbing requires incredible strength of mind – something I don’t possess. It also requires immense physical strength, grip, and exceptionally strong forearms and wrists.

I can’t imagine this sinewy lad pulling himself up against the sheer rocks that dot Bangalore’s outskirts, relying not on the sense of sight as we do, but on the sense of touch. How does he know where to place the next step? How does he know how to find the next crevice? I want to ask Nandish if he loves running. And then I stop. I realize that that sport is something he can’t try unless he is on a safe track. He doesn’t know how to just step forward the way we all do, unheeding all through the day. But this he does know.

Unlike me, he knows how to see. He sees possibilities in life where I see nothing but the abyss of deadened hopes. He sees opportunities where I only see disaster. He walks forward even when I can see there is no trail. He sees a life open that I have shut myself to. A life where we are not defining ourselves by our weaknesses, but a life where we realize that there is no such thing as a weakness. He sees more than I ever will.

And because of that, Nandish has made it to the Indian rock climbing team and will represent India in France in December. I am hoping I will be there to cheer him on, even when I can’t see as well as he does.

If any of you would like to support Nandish financially or offer moral support, please feel free to write to me.

PS: I love the way the Universe operates. Nandish called me first on the 18th of May last year. By sheer chance, I seem to have written this post on the 18th as well.

UPDATE: I asked Nandish his birthday. Should I be surprised? It’s the 9th of November.

7 Replies to “Meet Nandish: Who Makes Me See”