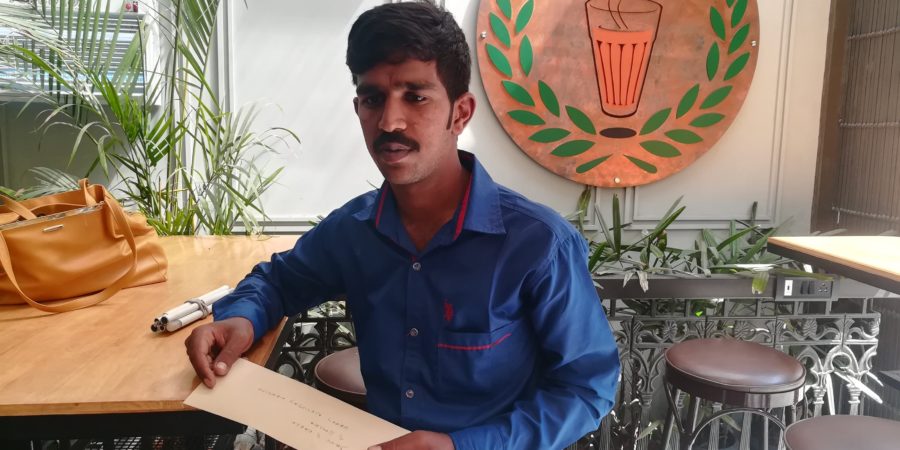 Sometimes, it’s really about time. The right time. About 1.5 years ago, I had cringed when I hadn’t been generous when faced with someone in need.

Since that May of 2017, I have gone through so many different situations when I have had opportunities to be generous, kind, and compassionate, and yet found myself wearing quite the different mask. But as I wrote here, I have also developed a rather strange friendship with the same lad who I hadn’t helped last time around. I haven’t really given him time or made any efforts to ease his life. I don’t know why Nandish persists in talking to me. But there is something magical when people you don’t know don’t give up on you. Or for that matter, when anyone doesn’t give up on you.

Today, I finally met Nandish after that journey on the train last year. We met outside the same Metro station on Church Street. I gave him the money from my American family, to which I had added in a little. It isn’t much, but in some way, I feel that today on World Kindness Day, the Universe might be a tad pleased with me.

We sat in a tea shop, and Nandish told me about his life in response to my hesitant questions.

About his visual impairment

“I have always had this since birth. It’s been darkness all through, but over the last year, I feel there has been a little bit of an improvement.”

As we sit down, he listens to What’s App messages through a tool and I watch, ashamed, at my ignorance.

“We run with a guide always. A string or a loop is tied to the guide and me, and we are guided through the marathon.”

His next big ask

Running 50km a day on a Mysore to Bangalore run in January for a total of almost 160km. That’s like 3 full marathons in 3 days.

Nandish is preparing in December for breaking into the state cricket team for the visually impaired. He is also awaiting his passport to go to France for the rock climbing event.

As we spoke, the people around us in the cafe listened in curiously. Passers-by strolled through busily. The sun was blazing through with Bangalore going through an unusual period of summerish-highs. I thought about how I sat here at about the same spot last year and typed a hurried email about this same lad. Now, this year, who would have thought that the same space would result in an entirely different feeling?

Nandish is telling me about his practice ground. I listen. And then I listen to the words he probably lives his life by, and which I struggle to live with.

“As long as you face those fears, Ma’am, everything is ok.”

And no one is facing them better than you, Nandish.