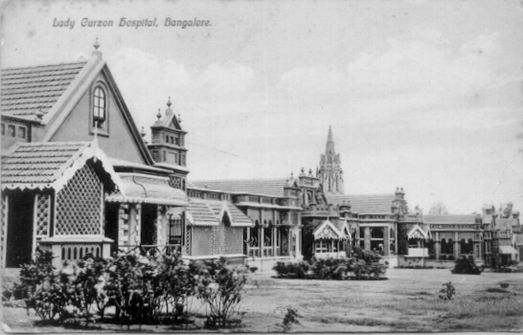 Looking down the far edge of the wall, there she was. At the same place as she always had been. She had this one place that she occupied, hugging the walls of Bowring Curzon hospital.  In front, several fast food restaurants. And the hub and throng of Shivajinagar’s people as they moved through its narrow bylanes. Below her, an old rucksack. And on that rucksack, her dog. A street mongrel. Beautiful one at that. Brown fur closely matted. And stretched out asleep while I scrambled out from parking my car inside the hospital.  I never saw the dog awake. It seemed impervious to the cacophony of one of Bangalore’s busiest streets. I would sidestep her and walk away in the morning. Sometimes, she would beat me to it.

If I was late, she would already be inside the hospital. Doing the begging rounds. Dragging her feet across. Blue saree trailing the ground. Or rather, the knees. Hair wild and short. A curl of grey and white. Skin ragged by the sun. She would put out one palm and plead. With just her eyes that were sightless. I would hate to look. I would turn away. There was you see, nothing inside those eyes. And so, I would turn away. Shake my head in irritation. I had things to do, didn’t I?

I don’t know why I remembered that woman today. I am sure she would be there still even though it has been months since I have gone past the hospital. Drop in there and look out near the entrance of one of this city’s oldest hospitals. Wikipedia tells me that “Mr. Lewin Bentham Bowring, the then Commissioner of Mysore” opened this hospital in 1868. Not sure what to do with it perhaps, it was handed over to the Government of Mysore in 1893. But I wonder if Bowring from Hackney, Middlesex imagined his hospital to stay. And stay much the way it must have been in 1868 even now where dogs sleep and the mute crawl.

2 Replies to “The Mute and Bowring”