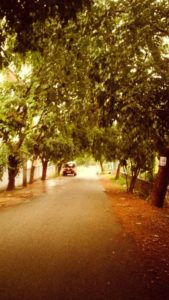 Tomorrow is the  TCS World 10k marathon. Many years ago, I started my love for running with the then Sunfeast marathon. I took the easy 5K or rather I think it was called the Open 5k. I had hardly prepared and I didn’t know what a good time was. I was determined though to never walk. I would jog if I couldn’t run but I wouldn’t stop and I wouldn’t walk.

The marathon looped its way from Bangalore’s Kanteerava stadium, going through Cubbon Park, and then coming back. My legs were lead when I turned into the stadium. I was almost 51 minutes into the run. 51 minutes! For a miserly 5K! Running through to the finish though was still exhausting, but somewhere a tiny little bulb silenced that voice inside my head that tells me I can’t do it. That voice is always my best friend. Always telling me to doubt. To not trust myself. To just think again. To wonder about consequences. And to warn me about fear. It’s a voice that resonates in my head, all day long, but that day, for that moment, that voice was silent. All I could hear was the glorious sound of exhaustion.

Since then, I went on to the 10K. Ran the Midnight Marathon in Whitefield a few years ago. I don’t remember the time, but I do remember that it was much faster than running 5k in 50 minutes! From then, my running journey has been sliding off. I would give up running because I would just get bored. Running is a solitary pursuit, and sometimes I hate the solitude imposed on the solitary. This year, I started running regularly again. The past 3 weeks I have run a 10k at least once. My speed is still miserable. It  hovers around 71 minutes. I know. I know. Run faster. But what I do is I just join the meditation. My mind runs a million things through when I run. There is no emptiness, but there is silence in the chatter. You are out there. And it’s you. Only you. Dogs may come and go, snarling at your heels. Music sometimes. Music not.

Today, there was. Kelly Clarkson with her heartbeat song. If you haven’t heard, it go and listen to it now. It’s the kind of song that perks me up. And it takes a lot to perk me up. That and a K-pop song called One Chance. These two songs. A light rain. The old knee starts to pain after a while. I have no rhythm today. I don’t know why. The voice continues on in my head, ruminating over a 1000 things in the future or a 1000 things in the past. Toward the end, the rain starts to get heavier. I try to run faster. But the mind stops the body. I still can’t run below 70 minutes. I think is the GPS wrong? Is Runkeeper tracking it wrong? But what does it matter? For a little while today, I was myself. Just running miles with a million thoughts for company.

One Reply to “Running On”