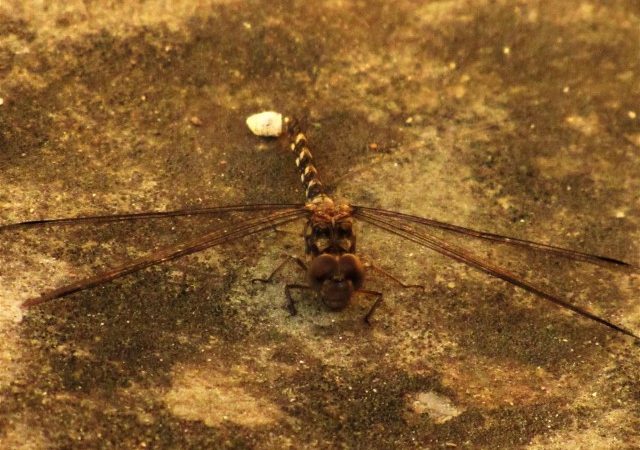 Bangalore has been beautiful these last few weeks. At night, I sleep with a light quilt. The evenings and early mornings are edged with misty showers. My ‘walks’ on my terrace, therefore, had become less frequent with the rain.

But one evening did draw a blue shade of promise for me, and I ventured up.

The mynas, I spoke of earlier in this post, were still busy doing whatever mynas are supposed to be doing in the evenings.

I politely wished them and reached the roof where the solar panels form a little bit of a perch for me to sit on. Barely had I sat down, then I saw a flickering movement of black.

It was a black dragonfly. I followed him with my eyes as he settled down a little further away. Now, I had seen dragonflies before. But this was the first time I was seeing a dragonfly with what seems like black wings. Is it even a dragonfly? I don’t know.

I sat there and read for a while. When I got up 20 minutes later with dusk hugging me, I see the same fluttering movement in front of me. It’s him again. Or her? I am not well-versed with identifying dragonfly gender and I apologize for my gender-incorrect language to all the dragonflies of the world. He floats around and lands in the same spot he had been before I arrived. How cute, I thought, and then thought no more of it.

Until the other day when I go to the roof again. A shimmer. A dance. There he is again. In that same spot. He moves away when I come and settles down a little further. This time, I talk to a friend on the phone. He waits patiently until I finish before going back to his spot.

Now, I am curious. Is this his home? You don’t really think of dragonflies as having a home to come back to. Where do they all go once night calls? Do they stay in the same place? Do they keep wandering? I glance around the roof to see if I can identify anything as a “dragonfly home.” Nothing. The solar panels. The water tank. Old tiles. A rope, for some reason. An old commode that is turned upside down, for even stranger reasons. What is making you, my dear dragonfly, call this home?

Another day, another evening. He is there again. The day before yesterday, he is still there.

We are friends, I like to think. He doesn’t seem to mind my presence at all. In turn, I adore his presence. If I say I count a dragonfly and some mynas as friends, do I sound odd? I think it sounds beautiful.

I search Google for the meaning of seeing a dragonfly. And it tells me that dragonflies are supposed to symbolize inner transformation. Is that you want from me, my dear dragonfly with those shimmery light wings? I wish I could fly like you. I wish I could be as light as you. I wish I could be everything you are. So, I try. I imagine myself as light. I imagine my thoughts to fly. I think of myself as someone with wings. I try. And during my weakest moments, I do feel I can. That I really can understand what Rumi meant when he said the wound is where the light enters.

And then, I read this article on dragonflies.

“The carefree dragonfly we see out in the sun is nearing the end of its life.”

I needed a dragonfly to teach me that. A dragonfly I didn’t know was nearing the end of its life. But what a glorious life, my dear dragonfly! What an utterly beautiful life.