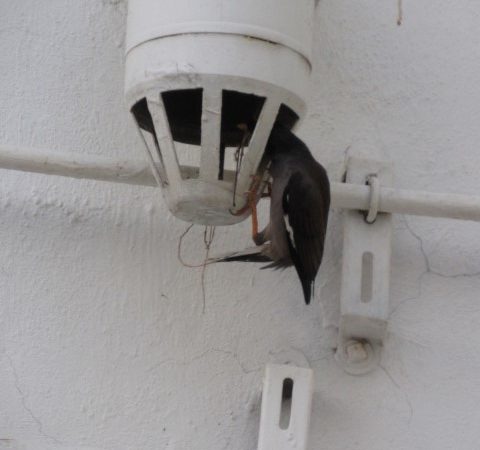 I have been staying with my parents ever since India’s lockdown began after the Kannada New Year of Ugadi. Unlike my little apartment, theirs is a sprawling two-story house with a marvelous terrace.

During these last few weeks, that terrace has been a solace for me on sultry evenings. I escape there after a day spent working in the stifling heat of my bedroom. These last few weeks have been chaotic, jumbled, messy, and complicated for a lot of us. We are trying to find the beauty in the anxiety, but I know we struggle every time we open the newspaper or watch TV or scan the news online.

How can we lessen that struggle? How can we be brave and make friends with our anxieties? I don’t know about you, but I like to find moments of grace. Moments of being. Moments where we can just allow our life to fall away, the water of all its memories slide off our weary backs, and we just pause and see the grace still there. Here. Everywhere.

My moments of grace came through a pair of mynas.

A huge white house is right in front of the terrace. The house looks startlingly bare – just one window carved into its sheer wall. I have never seen the neighbors who occupy this house. But now I have seen them. The non-human neighbors.

Four mynas are occupying the chimneys that jut out of the walls. Two for each chimney. Yesterday, one half of the mynas group was busy building a nest. While one myna kept watch, the other busily got twigs, scurrying inside the chimney.

Meanwhile, the other two mynas from the other family would just observe. Was the nest-building shoddy? Were the twigs not of the highest quality? The nest-building mynas didn’t care. Every now and then, they would hop on to the ledge to sip from the rainwater accumulated there.

I watched them in bits and pieces through the course of the day. In the evening, when I went up to the terrace, they were done for the day, resting on the ledge. As darkness slowly melted into the sky, they disappeared inside the chimney. I sighed and with mosquitoes buzzing around, I started to make my way down. Then, suddenly, one of the mynas came out of the chimney. For no reason at all, he made a wide loop around me, swirling arcs of fluttering wings, before landing on the roof of a house under construction in front of me. We stared at each other. A hawk in the sky. A human on the ground. A myna on the roof. The moment stilled into silence.

And then he danced his dance, flying into the chimney. It was night officially. And I had been graced with the sublime beauty of the Universe.

My day had been all deadline-driven. Words and sentences to be carved and chopped into precision. Invoices and taxes to be pored over. Sickening thoughts of “Where’s the next big project?” or anger-driven thoughts of some idiot or the other in my life.

But none of those mattered during those moments of grace when mynas showed me to build a nest and, more importantly, to fly for no reason at all.

This was the bonus:

Have you had your moment of grace?

14 Replies to “Moments Of Grace: To Fly”