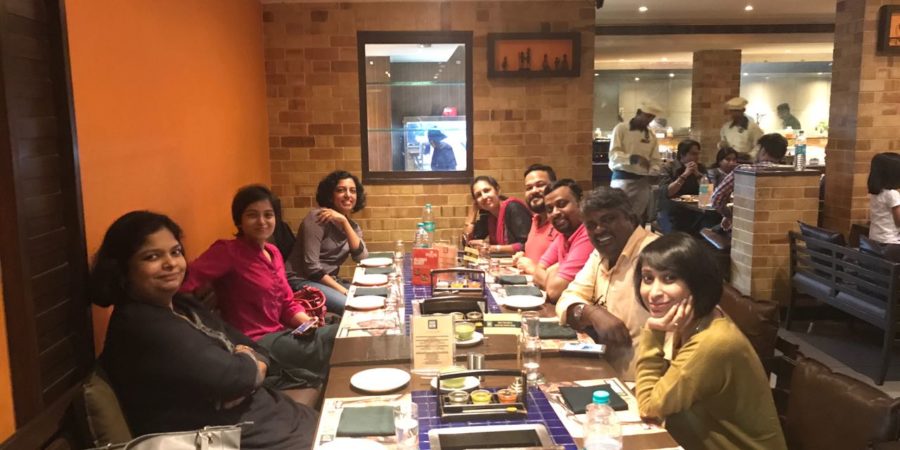 On the 6th of September, 2004, I stood at the entrance to a rather forlorn-looking building on Bangalore’s Double Road or KH Road. As I entered, I saw another woman sitting at the entrance in front of a security guard. The guard was apologetic.

“The office opens only at 9:30, Ma’am,” he told the girl. “Then why did he ask me to come at 9 then?” muttered the girl in irritation. I glanced at her. A thin, scrawny girl in a ponytail. We didn’t speak to each other then. I was too shy to talk to a stranger even if we were probably waiting for the same office to open. I walked out and stood outside, observing the rather sedate traffic of that time.

That was my first meeting with Birdy. Yes, as undramatic as that.

We were to join Automotive World (AW) as content writers. It was her first job and my third. This job would also turn out to be one of the best jobs I have ever had. Not in terms of the work or the management or the salary. No. None of those factors you think matter in the long run. No. It was simply the best job because it was here that I met a bunch of people who were amazing colleagues at first, and then some of the best friends now.

Let me take you through them:

Birdy: Spoken enough about her, haven’t I? She wasn’t a Birdy then. She was a Swati who would get into a fight with the new manager who felt she spoke too loudly in the office. She would quit in 2005. By then, we were such good friends that I quit too. And so also did the rest of us.

Tanushree: Tanu to all of us, she was the wild-eyed researcher who was probably the only one among us who was the most serious about her work.

Raghu: Rags was the one with the most experience and the one who would also tease everyone the most.

AG: Financial analyst nonpareil and the one who would tell the boss, “Fuck off.” That brusque exterior did hide an extremely helpful heart, though.

Jai: The gentlest giant you will ever meet and who would keep us in fits. He also had the loudest voice that would annoy the calling guys and the manager, and the softest heart.

Francis: The scrawniest guy on the team who struggled with finding stories in a very niche component sector, and who was teased mercilessly by Raghu and AG.

Veena: The one who got the most amazing food for us! The softest voice on the team, a gentle soul who would join Birdy on afternoon walks in Lalbagh. Those two remember those times fondly. Where would you have a workplace where you can take a brisk afternoon walk?

Vidya: Who joined us late and would forever be immortalized in my memory as the Vidya who in exhaustion on our team trip to Chikmagalur sat on a rock during a trek, and said “Putaka Putaka.” We all think she was trying to say “Put something in the car.” But that is a matter up for debate still. She is also the person who wrote ‘paved the way’ a lot, and I giggle even now when I come across that phrase.

Rohit: The web guy who would stay on longer than any of us before going on to start his own company

Hemant: The guy who did everything, including hiring this motley bunch.

We laughed. When was the last time you were in an office where every day meant laughter every hour?

We giggled. Incessantly. At everything.

We teased each other with good humor. Jai had a crush on Megan Lampinen, the hot young British editor. Even now, he blushes when you mention Megan.

We supported each other. We edited each other’s articles. We gave ‘news stories’ to others who struggled to find any that day. We had each other’s back to the end – we all left AW at about the same time.

We are still there. I get the loudest cheers from this group if I do anything remotely worthy. We help each other with clients. We give job referrals. Over the years, we have changed. We have filled out those scrawny corners. We have become older but not wiser.

We have gone to different jobs. We have led different lives. Last year was the first time we met after a decade almost. Yet, we laughed just the same. We had the old memories of AW to share, but we also had new ones to create.

This group is the reason for AW being the greatest job ever for me. And the reason why 6 September is Friendship Day for me.

To the non-AWers – This post is proof that you can make friends at a workplace too. We end up thinking that college and school are the only times we can make friends. Nah. If our hearts are open, if we are generous, kind, and prone to laughing a lot, you can always make friends. Join us.

9 Replies to “The Greatest Friends And Colleagues Ever”