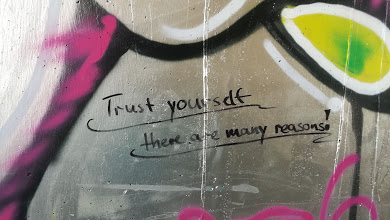 The other day, a friend dropped in from Mumbai and asked if I could meet him the next day. My answer was curt and unlike what I usually respond with. I said, “No. I am busy.” After I sent the message, I sat a while, looking at it. The message looked rather forbidding, casting a shadow with its brusqueness. It seemed cold. It seemed weird. Horribly impolite. It seemed everything that I don’t want to be.  I don’t like using the word ‘busy,’ even though that ‘s the one word I hear the most in daily conversation. We seem to be in an epidemic of busyness. Just what emptiness are we all trying to fill in with our “busy” lives?

But going back to my friend, there was some baggage to my message, if I can defend myself. I was irritated with that friend for not informing me earlier. He and I have had some issues as well recently. Also, I was annoyed with his rather casual approach to someone else’s time. But I was also genuinely stuck. I was “busy,” as we were working through the Diwali weekend and I was having the sweet Poodle visiting me the next day from Germany. I was helpless with the client’s demands. And there was no way I would change the long-awaited visit from the Poodle.

But despite having a genuine reason for being ‘busy,’ I felt guilty that I rejected the friend’s offer to meet. I wondered why. And then it struck me.

The No I Say Yes To

Usually, all through my life, I have found it hard to say no. We say yes to anxiety but say no to peace. We say to chaos but say no to serenity. We say yes to pleasing others and no to pleasing ourselves. I say ‘yes’ all the time, forgetting that I have a soul to take care of. I think I should be grateful that the only ‘no’ I have consistently managed in my life is to marriage! I can’t imagine my life if I had said ‘yes’ to that!

I remember a friend who would suddenly pop up and ask to meet. If I murmured that it might be difficult at the time he suggested, I would get the response, “Busy lady!” The implicit accusation in that would make me furious at a time when I didn’t have Pema Chodron in my life, and I didn’t know better. Now, I can brush it off.

But can I really use the N-word more often? Without feeling guilty? I realize now that my problem with saying no comes from my long-held fear of rejection. Before, I would want to be agreeable and pleasing to everyone. Now, although I don’t need to do that, I still can’t handle a no from someone else. And I can’t dish out a no, it seems, because of that.

I project an aura of confidence but really at heart, as the closest people in my life know, I am just as vulnerable as you. Pema Chodron has this wonderful tip that explains how she handles ordinary situations such as a traffic jam. She uses the mantra, “Just like me,” reminding herself that just like her, everyone else in that jam too wants to reach somewhere. That phrase is stuck in my head. I want to twist that around and say, “Just like you – this is me too. Just like you.”

It’s just that most people don’t seem to think I am like them. A friend asked me in surprise the other day, “You? What problems can you have? You are so confident! And strong!”

How do you show you are crumbling inside? Do you have to shout it from a blog post? Do you inform in a newsletter? Do you have to call everyone and tell them? Being vulnerable is the greatest gift you can give yourself – for so long, I have told myself ‘no’ to being vulnerable. I have practiced too hard and too long the delusion of appearing strong. To be vulnerable is being weak, I thought foolishly.

The brokenness and struggles are the biggest ‘yes’ es in our life. They are our call to life. They mean that yes, we are struggling, but we are being alive in that process.

So, here’s what I can say now. These are now my no’s. Do you have anything to add to this?

The No’s That Matter

And say yes to love. Always.