Well, the D train got me through safely to Shenzhen. The only person who helped with the luggage was a non-Chinese. A curly-haired lad poetically called Oh Sun Moon. A Korean who was spending his summer vacation traveling. He had just come down from Shanghai, after spending time in Qingdao and was at 28, still a student. All students in South Korea are forced to undergo compulsory military education. It made me remember my first-ever students who were also Koreans. Their names have obscured themselves into my memory but I remember them telling me how frustrating it was to waste some of the best years of their life in the army.

Oh Sun Moon had a charm about him. He tells me that he will be in Shenzhen for three days, then Hong Kong for ten days. And after that, he is going to London for an extension of this holiday, then Ireland. I sit back against the plush seats of the D-train in amazement. And for all this traveling, he has a small, really small backpack. “How are you going to travel to all these places with just that?” I ask incredulously. “Well, girls require a lot. I am a boy, I don’t need much,” he grins with a winsome smile. When the D-train stops 1.5 hours later he helps out again with the luggage, panting with the 40-kg monster he is lugging and I walk through the long underground corridors of the Shenzhen train station. Troy is there to meet us and I heartily thank Oh Sun Moon for generosity and kindness non-pareil. It was a goodbye that was said in haste. For just minutes later, Oh Sun Moon comes running up again. Now though, it is he who requires help. He needs to call his friend with who he was staying with in Shenzhen. Troy helps him out and it turns out the that friend also stays in Shekou, which is where we are going.

Smile. Did I say that Troy’s apartment was on the fifth floor? With no lift? All that baggage and hauling it through narrow steps – Shenzhen seemed so cruel. Someone in the Universe seemed to be playing a real bad joke. Minutes later, the door swung open, and Troy’s sister, Amelia was there to welcome. The small apartment seemed dwarfed by eight pieces of luggage. Amelia rustled up a quick lunch, part of which included small cubes of duck’s blood from Hunan. I was too tired to eat. Too tired to sleep. Too tired to talk and too tired to partake of hospitality. Today was also the day that I saw Birdie read THAT mail from that Asshole – and I wished I could take her in my arms and protect her from all these pretenders to love. 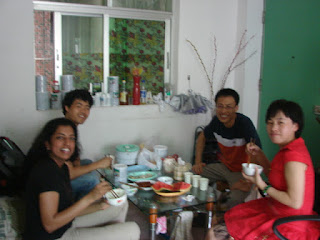 Evening Troy took us to his Amway class. Held in Chinese, I could but understand little. What followed after the class was far more interesting though. The nutritionist there had this little contraption. Vaguely called the Chinese Electro-Acupuncture machine, the device emits little electrical impulses. The nutritionist takes my palm and runs the edge of the screwdriver over my hands gently. “Tell her when you feel a mild electrical current,” says Troy. I nod. Slightly apprehensive about this ‘mild electrical current’ I nod worriedly. The nutritionist regulates a few switches on the machine, probably adjusting the degree of voltage, and asks me if I feel anything. I reply in the negative. Slowly the screwdriver moves down to my thumb and I feel the first zang of electricity. Troy and the nutritionist exchange glances as I wince in light pain. “You have a problem with your back,” she says. I nod, amazed. For a month now, I have been unable to bend after hurting my back during a game of badminton. The screwdriver moves through more areas on my palm. At every zing, she identifies precisely what is wrong with my body. I glance at the chart of the palm – every area on the palm are believed to be centers that take their root for different organs of the body. In the end I am given the most accurate diagnosis without expensive scans, mindless X-Rays and innumerable consultations. I glance at the device and wish I could pick it up and take it home. Just as I wish I can pack China up and take it home.

China’s diagnosis is different – it’s not easy being in this country. The language drives you nuts. You wish sometimes that you could have something more to eat apart from chicken and pork chops to eat. Yet…I carry pieces of China with me. For a reason I can fain explain to anyone.

Smile. Did I mention that dinner was at a dim sum restaurant. At 11PM, the place is packed. Waiters walk around the noisy smoke-filled tables with steaming bamboo baskets of dim sum. 100’s of varieties of dim sum. This Cantonese delicacy is different from the dumplings or jaozi that you get further up north. Most of them are meat though. I hide my disappointment amidst varied colored dim sums sweetened with sugar and the raw taste of the last Shenzhen night melting away into the inky dark humid sweetness of night.