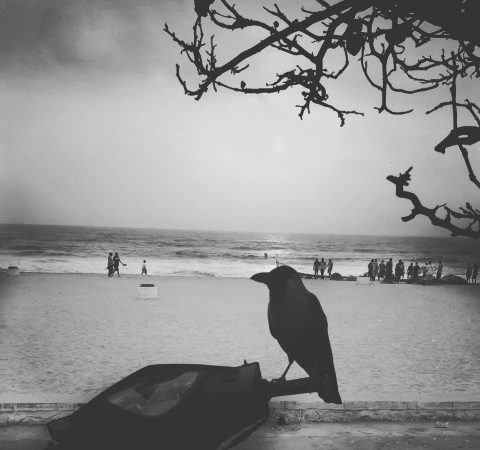 Regrets are not final. They are redeemable coupons, urging us to look for the good in our self and others.

I was in Chennai in November last year. It was a typically hot and humid day when I came across this small outlet tucked away near a corner just behind Besant Nagar’s beach.

“Madras Coffee House” is not the place to have tea probably. But I love a strong, black tea just as much as I love a good black coffee. Although I have grown up in Bangalore, I have never been a fan of its ‘eat and go’ culture, made famous by its darshinis. I like to have my food sitting down, acknowledging the richness and flavors, rather than dashing something down in a hurry.

The woman at the stall is in her 30’s perhaps. I am never a good judge of age. When she hands me the steaming steel tumbler of tea, I ask her if I could take it outside. She agrees, and I walk down to where I had parked my car.

Perhaps, I sit there for an hour. Or less. I am not a good judge of time either. My throat is dry. The heat is baking my soul. I glance at my phone. It’s time to check out from my hotel and leave.

I get into the car and drive away, leaving two little steel tumblers sitting forlorn and lost on that ledge. Much later, much much later, the person I was with reminds me of those tumblers. Dazed and exhausted and irritated by the events of that day, I shrug it off. “It’s ok,” I mumble, even though I know it’s not ok.

Here’s the thing: I preach kindness, but I wasn’t kind then. I didn’t go back to that stall. I drove back to Bangalore. 6 hours of non-stop driving away from everything.

Then the regret hits me.

Regret is never a loud voice. It’s that tiny voice that just gnaws at your insides, reminding you of what you want to forget.

I toss and turn in my sleep in the days that followed. I don’t know how to call that outlet. I ask a friend in Chennai to go and check it out. I try to trace my route on Google Maps, but it is hopeless. She ends up in an empty building that seems to echo my own emptiness.

The person I actually had that tea with doesn’t respond to my request to go back to that outlet.

I think of giving up because it’s easy. But I am trying to give up less these days and give in more.

And then, another visit somehow happens.

Two months later, here I am. In Chennai again.

The day after I reach, I rely on my memory, retracing the path of that day. I use the GPS a lot, but I can be a bit of a homing pigeon sometimes. The pigeon in me finds that “Madras Coffee House.” And there she is! The same woman, but serving better tea this time.

I tell her sorry in English; she receives it in Tamil. I tell her I found it difficult to sleep for a while, tossing and turning in the regrets of mistakes. She laughs. “It’s no problem. I didn’t get those tumblers back, but you sleep well now, it’s ok.” She doesn’t want payment either for those lost tumblers. I sip the tea, standing there, and I think I will sleep well.

I will. Latha, for that’s her name, smiles at me as I go.

That thing called regrets we hang around our neck? We can make memories of them. We can untie those knots because we made them in the first place.

This post is for you, Shrushti, for writing to me after I forgot about this blog for a while amid ennui, stress, lethargy, and despair that I write horribly and terribly and despicably. But this support really makes me feel like what I write here makes a difference. Somehow. Somewhere.

Thank you and much light.

12 Replies to “Regrets Are Not Final”