Did I actually see a sunrise yesterday? Not that sunrises are rare in this part of the world but that I was awake early enough to see one! Yesterday was the day of the mad mad journey to Luoyang.

The journey started on a fairly sane note. Ruby arrived at the dot of 6AM but it took some dithering before Birdie and I were ready. For me, I had spent an eventful night. As in the previous post, I am trying to realize the way to reach a more intuitive understanding of the people we stay with. More on that later. A long 4-hour bus journey in a dirty bus that stopped a million times to fill up passengers was spiced with what was the best loumo I had had in Xuchang – it came close to matching the divine Indian parantha and was hot enough to set my tongue on fire! With barely 3 hours of sleep the night before, I thought that I would be nodding off the minute my head rested on the grimy seat but it was not to be. Ruby was in one of her best moods and the three of us had a wonderful conversation that lasted for most part of the journey. AND I hate hate hate this when this happens – somebody puking inside the bus. A little girl did that in the seat just in front of mine and I still squirm now just thinking of that awful putrefying smell. Thankfully, divine mercy smiled on me and for a strange reason, we had to change the bus midway.

Luoyang at first sight was breathtakingly shady. It was such a refreshing change to see a Chinese city that was shaded by huge, leafy trees. The Baima Temple that we first went to was on the outskirts of the city – and for some reason, I went there expecting a white temple. Contrary to the name, there were no wild horses prancing about but there was an atmosphere of serenity that I liked there. Perhaps having all those Buddhas around helps add to the tranquility. I don’t know what it is about my connection to the Buddha – he has followed me around China and how did he know that I needed him that day? He is the only one in that other world who magically bestows peace to my own fractured soul without saying a word. I carry that peace till now.

After a free lunch at the monastery in the temple – true vegetarian food – and in true monk style, we had to wash the chopsticks and bowl ourselves after the meal, it was time to leave the serenity of the temple.

Another bus ride on Bus Number 56 to the train station brought us to Ruby’s old classmate, Wang Jing Jie. The sun was steaming down by this time and I was only too glad to hop on to Bus Number 81 to go to the World Heritage Site Longmen Grottoes that was another 40 minutes away. 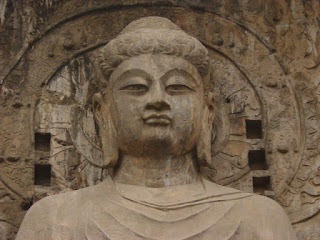 The Grottoes were crawling with tourists. Chinese tourists are among the most irritating – they usually arrive with tour groups – wearing identical clothing – and a tour guide waving a flag around and speaking loudly into a microphone. Surprisingly, there were a fair number of French tourists too. Ah! Do I have to describe in words the power of those statues hewn on to rocks centuries ago? The Buddha everywhere. His serene face dominating those caves. And India everywhere too. Cave sculptures first originated from India and it was so uplifting to see Indian architectural forms faithfully replicated in a Chinese city. Majestic, immense and soul-stirring.

What happened next wasn’t so soul-stirring. Was treated to some fabulous noodles by Wang Jing Jie but then that dratted instinct of mine was not allowing me to enjoy that dinner as well as I should have as I was worried that we were going to miss the bus back home. Both Ruby and Jie suggested we stay back in Luoyang and watch the biggest fountain in Asia(!) but I just needed the comfort of my bed to sleep AND we had left our passports back home. (Talk of stupidity!)

My instincts were right after all. The last bus to Xuchang had already left – there were no trains – and it meant a mad dash against time to Zhengzhou to catch a train there at 22:30. We left Luoyang at 20:00, reached the train station at 22:00, waited in a frustratingly long queue till 22:15 only for the blessed lady at the counter to tell us that there were NO tickets to Xuchang. Nay, not even standing seats even. The next train was only at 3AM!! Well, mad ideas came to the fore – should we call our taxi driver, Wang, to come to pick us up? Stay in a hotel? Stay with Ruby’s aunt? Zhengzhou doesn’t look the safest city – prostitutes were crawling around the train station, their garish attire a dead giveaway. It was left to take refuge for the night in a dingy hotel that asked 80RMB for 3 beds before catching the 7:30 train to Xuchang. 40 minutes later we were back and I was left wondering why, oh why, did we struggle in buses for 2 hours all this while?

I loved Luoyang in the end. I loved the craziness that ensued. The company that kept me smiling. The fishes in the ponds. The trees that hugged the streets. The Buddha who smiled his peace. And I loved the lesson it gave me – that loneliness is not caring for another.