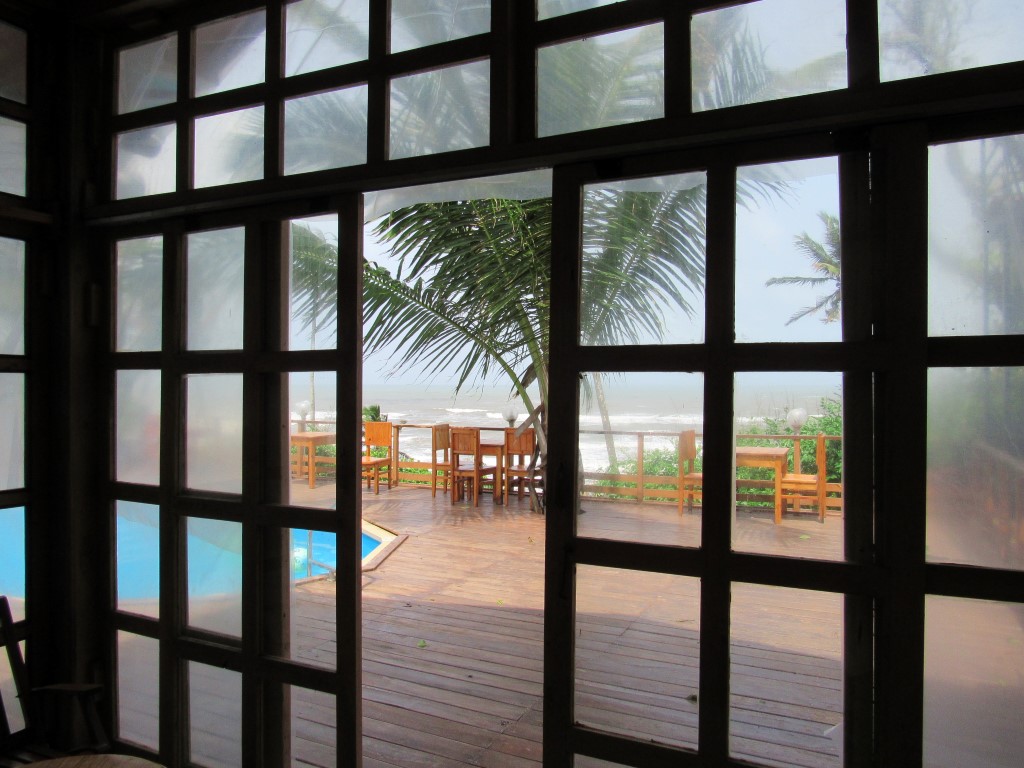 I hadn’t posted to this blog in a while. A combination of ennui, chaos, and a sense of wordlessness had gripped me. As always, when I feel that I have reached the end of my tether, there is just one God I turn to – the God of Travel. The long Eid weekend was a bonus and I added two days off from work. With the monsoon hovering over India, I wasn’t going to venture to any of the hills. It had to be the sea. And when it’s the sea, there is just one word that comes to many minds. Goa. I was never a fan of Goa. I preferred the lesser known offbeat gems in Mangalore or Coastal Karnataka, Devbagh being my favorite beachside retreat. But over the years, after more than three trips to Goa, this tiny state has led me to its allure. From its raucous beaches to quiet rock-strewn beaches, from the colors of its colonial past, Goa has gradually entranced me.

So, my first solo trip in India had to be Goa. All the way to North Goa to the rocky cliffs of Vagator. I write this from the wooden deck of Aryans Hotel. The name is weird but the location overlooking Ozran Beach isn’t. Clouds hazily drift by, blown by a relentless wind. I haven’t yet taken the travel craze of the year – the selfie. I have no pretense  to a hairstyle left with the wind such a cacophony in my ears. The waves below continue their relentless march. The other night, a friend of mine was telling me that he has never met someone like me. I wasn’t quite sure that was meant to be a compliment, so I did not want to question further. But he was telling me that in the context of me staying alone and being perfectly happy about it. I presume he also meant my singledom in life. I am a contradictory mess. A person who loves to meet people but also is happy being alone. I have never been able to match the expectations of the ‘clingy’ ones. The ones who expect me to be in constant touch. There is a certain sense of neediness that I turn away from. I am a traveler who loves to stay. A gypsy who hates the wheels. I explained to my friend that I have always had this ‘push-pull’ factor in me. I feel there are two imps in me. The twins who wrestle with each other constantly. One is an extrovert, the other the opposite. One prefers parties, the other books. One loves to write, the other can ever spin a tale. I can’t keep both of them happy. Only one has to win. This time, the twin who wanted to travel won. But for a while, the other twin said that it is on the condition that I choose this period for self-reflection.

I haven’t done much reflecting. The KSRTC bus that took me to Panjim, Airavat Club Class, promises that I would sleep like a baby. I wasn’t relying on their word. I took a sleeping pill, especially after I was alarmed by the presence of a family with two small children in the seat opposite to my aisle. Most of the long distance buses never do go non stop. This one is no exception. The first stop was at the Kamat chain of hotels. And the next one as well. There are Kamats all over, dotting the highways, promising to serve South Indian vegetarian food for the weary traveler. I wasn’t one of them. Oh yes, I was weary all right. But weary of life, not of travel. Of the choices I have left. Of the sheer pressure of trying to live each moment. I wish I could blink and all these moments would disappear and I was just left with a little slice of life to live. That little slice and nothing more.

But I had this little slice and the promise of 3 days of sun and rain. Arriving in Panjim, with the usual bevy of touts ready to snap at your heels, I wondered to myself if this is why I do this. Why do I travel? Why do I feel restless? Why do I feel tied down? Is it for the chaos? For the serenity? The bus station in Panjim is not the place for such reflections. I find the bus that was on its way to Mapusa, a little town that is nearest to Vagator. I settle in against the window seat and looked out as Goa began. Questions can wait.