Last Saturday, Yoke called us to go “cherry picking, drink tea and play mahjong.” Are there better ways to spend a Saturday? Since I couldn’t think of any, we agreed. It was around 10AM when he came knocking on the door. The day was gloomy with a forecast of rain and we were wondering if we should really go to this place. Till this day, I have no idea where we went though. Yoke being Yoke, he had asked a Chinese friend to come along, and she was apparently really keen. “Let’s not disappoint her,” he urged. Rain or no rain, it was decided to go. And that’s how we met Silk.

Silk’s just the nickname we gave to Yang. We got along immediately, especially as Silk is one of the few Chinese I have met who really really love India. Her Dad was driving us to the bus station from where we would take a bus to the cherry picking place. Silk tells us how her Dad has business in India, and how he keeps visiting Mumbai. She herself spent last winter in Gokarna. My ears almost dropped to the car seat when I heard this. Gokarna? I can understand people going to Goa, but Gokarna? “Oh! It was paradise,” Silk gushes. She stayed in a resort called Namaste Yoga, which was by the beach. She loved the food, the idyllic nature of the place, the people, the clothes. “Look, I am even wearing an Indian dress,” she shows. And indeed she was. Not quintessential Indian, but it will do. A black top, which she says she bought in Mumbai, and bright-colored “silk” pajamas which she bought in Gokarna. She imitates beautifully how the street vendors protest when she tries to bargain. “Arrrrrrrrrre you kiiiiddding me Madam?” with the typical Indian nod of the head. Silk has also spent a year as an exchange student in Berlin School of Economics, and is now about to join Huawei in Shenzhen. 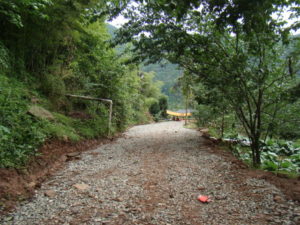 The weather was clearing by the time we reached our destination. Silk was joined by Jenny, another Chinese, who was a little quiet. They have been friends since school, Silk informs. And for the first time in China, I meet a Chinese vegetarian. Silk says that she stopped eating meat last year. “I just feel I am very lucky in life, you know. So last year, I made a vow while climbing Emei Shan not to harm animals. My little way of saying thank you for all the good luck I have had in life,” she explains. We hire a taxi to take us to the mountains – which is where the cherries grow. It’s late season now though, and most of the trees have been stripped of the cherries. For RMB38 you get to pick as many cherries as you want, and have lunch, play mahjong, and unlimited supply of green tea. A good deal, although I felt it could have been a tad cheaper. The spot we have chosen is right at the top of the hill. Sitting under a canopy with a now-fierce sun blazing overhead, we learn how to play mahjong. 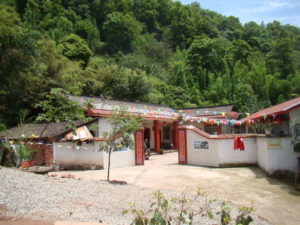 It’s addictive, apparently, although I don’t play.I just sit with cups of endless tea, my thoughts wandering through the green hills, before lunch is called. And what a spread it was.

Silk meanwhile continues to be entranced by India – and both Birdy and I are pretty amused. “Don’t you get annoyed with all the staring?” I ask. “Oh, I just ignore it,” she replies. “I know that foreigners will either love India or hate India. I just love it, you know. There is so much color, so much variety, and I feel that society is not as materialistic.” “Really?” I ask, surprised. We Indians, after all, love to make money. Just as much as anyone else. But it’s the feeling she gets from society, Silk explains. There is no frantic mad search for money. People tend to accept things faster. The last bit, I guess, I have to agree. I find her fascinating to talk to – she has great command over the English language, and having traveled widely, has more of a world view than ordinary Chinese. 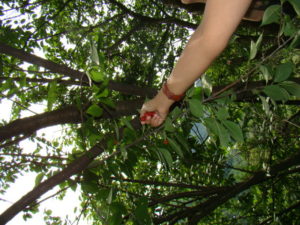 After lunch though, it was time for cherry picking. And it’s at this point that Silk was christened. She refused to walk through the rough undergrowth and bushes that cling to the hillside in search of cherries. The reason? The “silk” pajamas she bought in India! She doesn’t want them torn, muddied or otherwise ruined in any way. It was to be a hilarious cherry picking session. We go to a lot of trouble to pick a few cherries, as you can see in the photo below. But each cherry was worth its weight in fun! 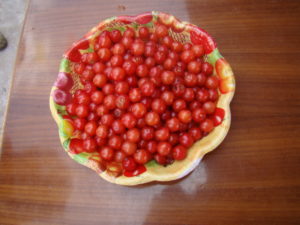 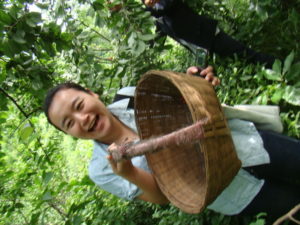 Another game of mahjong later, we are ready to leave. It’s almost 6PM when we hire the taxi to take us back to Chengdu. And what do we talk about during the 2-hour journey? India, of course! And then for no discernible reason, horoscopes. Silk and we share a common dislike for Pisceans. “Oooh, they are crazy, these Piscean women,” she says in a voice that makes us roll in laughter. “Never trust them, they will just have those big eyes, and limpid look, and everyone thinks they are soooooooooo innocent, but they are crazy. Cruel,” Silk adds. “I knoooooooooooooow,” screams a delighted Birdy, who doesn’t “believe” in star signs, but finds certain similarities fascinating nonetheless. Yoke, meanwhile, is utterly bemused. Silk, in case you are curious, is a December-born, Sagittarius.

We have dinner later at a new restaurant, and then we bid goodbye. “Thank you, my lovely Indian friends,” a text message from Silk later reads. She is getting ready for her graduation ceremony at the end of this month, before leaving for Shenzhen. I tell her that she must re-visit India again, and I know that she will. I am glad that India offered her its best face – I hope that she will never meet those crappy men who thrive on abusing/assaulting/raping foreigners. I hope she will continue to have wonderful experiences, see the amazing landscapes and colors of India. I hope we Indians will continue to be kind to her. I just don’t hope. I pray fervently that we will be so. It would be so sad to see her illusion of ‘paradise’ shattered. Let some illusions exist. It’s good for life.

4 Replies to “Cherry Picking and Silk”