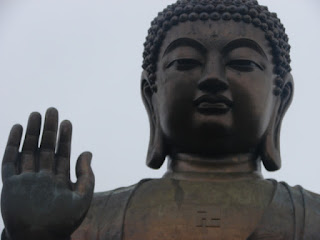 Saturday morning is twinkled with showers of sun and rays of rain. Clouds dash in and out, casting their shadows on a city that is cloaked with expectations of tomorrow. This tomorrow – Sunday -1st July – will mark a milestone here. Hong Kong has a past like no other. It’s been ruled by vastly different masters and for Hu Jintao, this tiny island city is crucial to maintaining his Party’s “One country two systems” rule.

I wake up to a flurry of thoughts. Sometimes I wish that I can live a different life – maybe go to the Himalayas – on top of a snowy peak where I can cast aside human companionship and its joys for the bliss of solitude. Perhaps the Buddha knew what he was doing. Lantau Island is home to the biggest seated bronze Buddha in the world. I have been there before. Then, as now, the clouds had danced around the Buddha – almost as if to break his trance, as if to defy that sense of calm that surrounds the Buddha’s face. I am no follower of organized religion – but I haven’t been to a Buddhist temple as yet that hasn’t offered me a sense of peace. Perhaps in all these shifting times of chaos, a mute statue is what I need – that immobility frozen through centuries. Last time I had taken the ferry to Mui Wo before boarding the bus to Lantau Island – this time it was the MTR all the way to a place that I now forget before boarding another bus to Lantau.

As I get off the bus, a furious wind drags a gentle rain down. The Buddha is perched high – unmoved – on a little hill. The steps are steep and as I pause amidst the billowing wind, I wonder —what if…what if the Buddha spoke? What would he say today? Would he wake up and see all the countless monasteries around the world, apparently studying his teachings – and would he shake his head, and say “No, no, that is not what I said at all.” Or would he say “Nirvana is not needed for man as I see today, for humankind needs not freedom from countless births and deaths – it needs nirvana from the cycle of killing.

Amidst the steady drizzle, I have lunch at the vegetarian restaurant attached to the monastery – it would prove to be my last Chinese lunch. Smile. Sounds more dramatic than I intended – but then, Chinese food as I know it, won’t be available in India. All too soon, it seemed that it was over. The day was dawning to a rainy evening and as I headed back on the bus to Tsim Sha Shui, I felt I had left a part of myself behind. That part that calls itself surrender.

As the lights faded across the harbor, I stand at Tsim Sha Shui and wait for Hong Kong’s daily “harbor and lights extravaganza” to begin. The clouds that have hung all day refuse to be cowed by a display of lights. The streaks of light running across the sky barely reach the eyes. I stand and watch for the second night in a row as Hong Kong’s famed skyline fails to pierce the gathering doom. I can’t understand this unease of mine – just as I can’t understand the peace I feel with the Buddha – and then again, maybe I should not understand. Understanding may be far too simple for me to comprehend. Like Maria Rilke said in Letters to a Young Poet:

Have patience with everything that remains unsolved in your heart. Try to love the questions themselves, like locked rooms and like books written in a foreign language. Do not now look for the answers. They cannot now be given to you because you could not live them. It is a question of experiencing everything. At present you need to live the question. Perhaps you will gradually, without even noticing it, find yourself experiencing the answer, some distant day.

Perhaps, the answer lies not within or outside. Perhaps there is no answer.