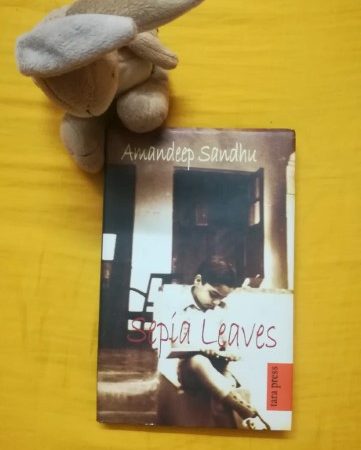 The recent death of a popular actor by suicide triggered a wave of conversations in India around mental health in the last few weeks. I don’t watch too many Bollywood movies, but the young actor’s death seemed to have struck a chord across the country. I don’t know why it was so. Was it because he was young? Was it because he was supposed to be leading THE life? Rich, charming, pretty girlfriend – you know, the works. What is it about his death that made a lot of people sit up and take notice? Was it the manner of his death?

What is it really that makes us notice a celebrity’s battles with illness but ignore our own?

I picked up ‘Sepia Leaves’ entirely through several acts of random kindness. I debated long and hard over this. It seemed so obscure, but my friend was convinced that it seemed a sweet, offbeat book that deserved a read. Finally, I got it down to the counter. But when I saw the total bill, I kept it aside. This time, the bookstore owner persuaded me to keep it. “I will throw it in,” he said, handing over the book practically free. So, that book came to me, like good books do, finding its way.

It’s not easy to write a book like this. Who wants to show the raw, naked, ugliness of our families when we can get on Instagram and show lovey-dopey photos of them? It’s not easy to share the battles of our mental health. Over the years, I have gone from excruciating shyness to projecting a veneer of self-confidence. It took me years of mental training to do that. I am, however, still a very shy person, and large gatherings make me freeze—no problem in giving a speech to the said large gathering. Just don’t ask me to mingle and talk!

Over these years too, I have seen several people struggle with their own illnesses – my brother was the closest, who, like that popular actor, chose a mode of death that seemed right to him then. I have seen my students struggle with low self-esteem and depression. I have seen people harm themselves – little nicks and cuts that they think can draw the pain, guilt, and anguish out of their system. I have met narcissists and been badly wounded by their emotional abuse of stonewalling, ghosting, and silent treatment.

And me? I go through spiralling fits of moodiness, anger, despair, and melancholy that have nothing to do with the realities of my life many times. I have a deep-rooted fear of abandonment and rejection. I am quick to anger and slow to forgive. I brood. I react. I obsess.

The thing is this: We struggle. We are not, as much as social media wants us to believe, leading perfect lives. We are imperfect and messy, and we are having a hard time accepting that. Not just of others, but from ourselves.

In ‘Sepia Leaves,’ it’s apparent that Amandeep Sandhu’s autobiographical account of his childhood spent with his mother is in many ways, a catalyst for the author to understand mental illness. His mom is diagnosed with schizophrenia. The rest of his family is diagnosed with a lack of understanding and empathy. A child’s view of the world is forever tainted by these twin despairs.

Simple prose, haunting images, and relentless in its portrayal of the author’s beautiful family, ‘Sepia Leaves,’ reminded me of all the sepia-tainted memories of my life. The people, shadows, ghosts, thoughts, scars, words – all brought up in vivid technicolor.

This book isn’t perfect. Just like us. And that’s perfect.

Do you have a book on mental illness you would like to recommend to me?

12 Replies to “Book Of July: Sepia Leaves By Amandeep Sandhu”