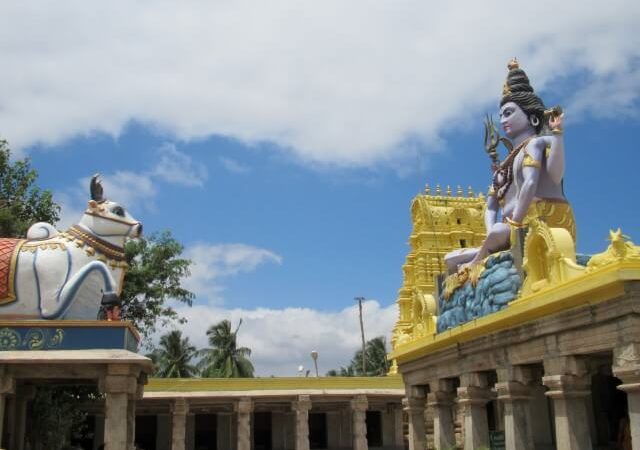 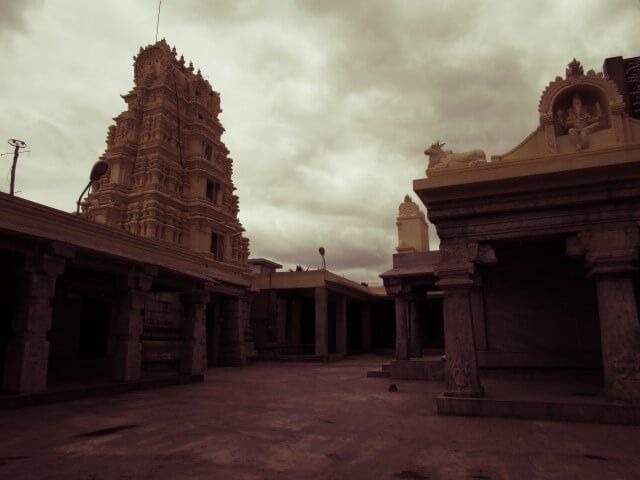 I stay in one of Bangalore’s more recently developed ‘IT hubs.’ The area there is chaotic. The air an unfiltered hell of poison. The people speak to me in Hindi more often than not. Traffic is not the word you can use to describe a 1,000 vehicles trying to squeeze past each other in a fuming raging stress-ridden style of driving that defies all rules and sometimes, all prayers. Which is why it’s a relief to go back to places in Bangalore where I can actually use the word ‘green’ without sounding like a fraud.

Harohalli has a bit of a history with me. Many years ago, I was a newbie to the world of work, having just completed my graduation. Content management was an alien world to us at that time and teaching seemed the closest and safest alternative. Jain International Residential School (JIRS) picked me up for reasons I can’t be ever sure of. I looked like a kid myself. How could I teach, I thought in moments of complete and absolute fear. It would be the first time I would be away from home, staying in a boarding school, first time trying to teach English to a bunch of brats, and first time trying to be brave enough to wear a sari all by myself. It would also be my first visit to Harohalli, a remote off-the-radar place that you would not have thought of going unless you were on the way to somewhere else. But school was a lonely place, situated in the middle of even more nothingness in the heart of Kanakapura. We were far away from all civilization. We used to feel we left school only to join another even more rigid school. So, on weekends, when we could squeeze in some time after remedial classes and before evening prayers, we would take the bus to…hold your breath…Harohalli. This nondescript town was our version of Brigade Road. It used to be the place for us teachers to ‘hang out’ after school. Till today, I remember an evening when my best friend and I took the bus to Harohalli from Kanakapura. My friend was a party-hard kind of a person. We couldn’t party in Harohalli, definitely. But we could form our own definition of party. We went to a pokey little restaurant and ordered Pepsi with pakoras, a kind of deep-friend Indian snack. A number of villagers looked at us, clad in our jeans and T-shirt, outrageous as it was. We didn’t care. This was our night out. That was our party. And just how fun it was!

Now, more than a decade later, I made the trip back to Harohalli, which is around 35km from Bangalore. The road was freshly cleaned from last night’s rain. Traffic was light, being Sunday. At times, Kanakapura road offers sudden bursts of green fields, and then increasingly brown fields, parched still by the season’s lackluster rainfall. Harohalli was a town then. And it is a town now. The bus station looks just the same decrepit bus station I saw all those years ago. It is market day and vegetables and fish are lying peacefully next to each other. Go down a little narrow road just past the bus station and a few meters later you have the centuries-old Arunachaleswara temple. 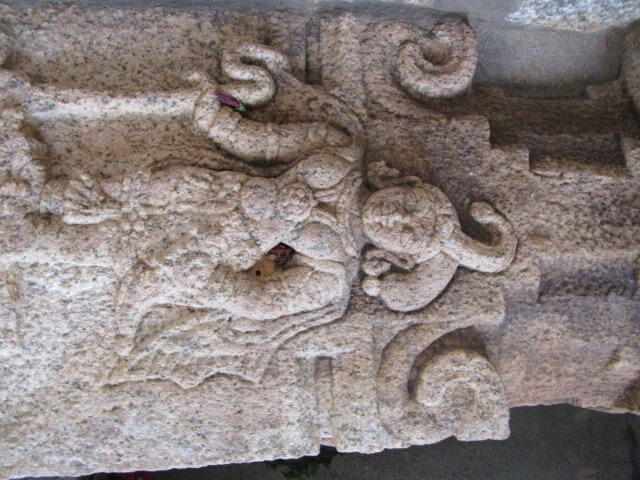 The ancient temple was supposedly built by an officer called Venkat Iyer during Hyder Ali’s rule in the 17th century. This contradicts Wikipedia that claims that the temple is more than six centuries old. Sadly, there is no inscription at the temple to help me verify either of the claims. There is a subtle simplicity to the temple. Not for it the grand carvings that make you keel over in awe as in Belur-Halebid. A sprawling courtyard leads you to the main temple, which is dedicated to the magnetic Destroyer, Shiva. There is hardly anyone there at the temple. An old man sits in front on a chair. “Start from the left,” he instructs me. “Take photos near the entrance as well,” he adds. I obey. I walk around to the left and the corridors are lined with other Gods. Many are empty and the priest tells me that they are still working to install the rest. You take a peek at the empty ones and wonder what could have happened. Burglary? History? Wars? Some recent renovation has seen the installation of a gigantic Shiva gazing fitfully at a demure Nandi. Inside the main temple, the same simplicity extends to the ceilings. No ornate decoration. Just a temple. For those who need to pray, it seems to say. The stone floor is cool to the touch. The rock-hewn pillars a tribute to those who constructed entire temples with no cement. 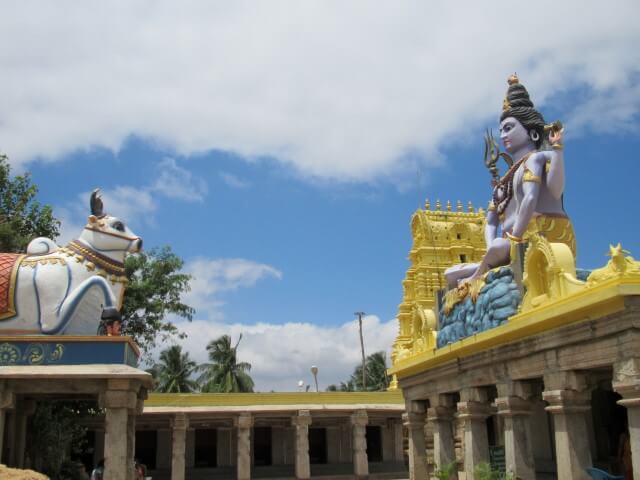 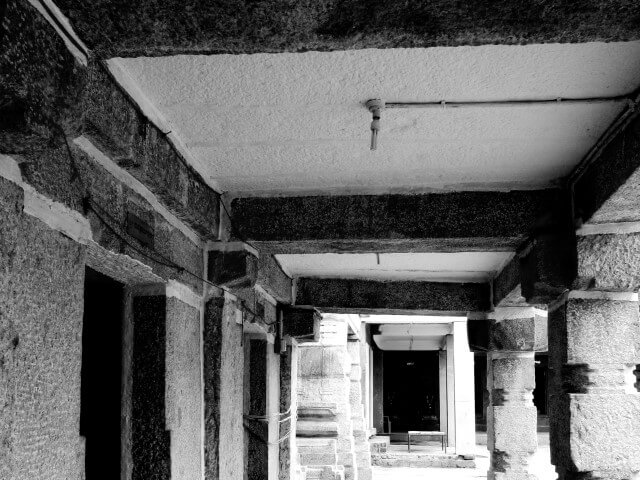 I walk outside and sit under the banyan tree. The air hangs heavy with rain. The dark clouds somehow add to the calm at the temple. I check my GPS and then the Wikipedia article about Harohalli, which strangely informs me that this is part of Mysore taluk. I smile. Harohalli was Bangalore to me. And this is Bangalore’s history that I wish the ones who crib about ‘nothing to see here in Bangalore’ would come and see. Our past has never been barren that we can’t look into it. There is much to see in any place if we only open ourselves to it. I would never have thought that of all the places, Harohalli gives me memories to remember for a while to come. 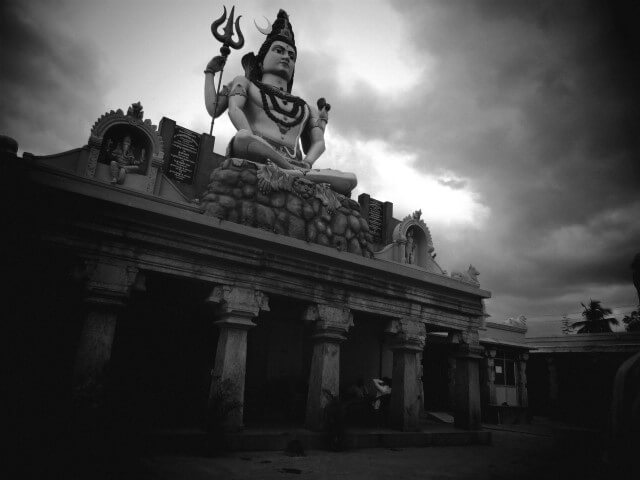